The man who designed urban mobility

In December, Deutsche Post will honor designer and professor of design Herbert Lindinger with a postage stamp in the series 'Design from Germany'. In a career spanning over 50 years, Herbert Lindinger has designed radios, telephones, corporate logos and exhibitions, although his passion is for urban design. He has designed large city squares, busses, sky trains, street furniture and of course, rail vehicles such as trains, subway wagons and light rail cars, including the Stuttgart S-DT8.12, a new generation of which is still being produced.

One difficulty when designing a light rail train (LRT) is the long service life: a new train should be technically and aesthetically equipped to last 40 years or more, which is no small feat given the speed of innovation - and some habits of public transit passengers. On the other hand, a new LRT generation should not make the older model look outdated, as both will be in operation simultaneously. The designer strives not to replace a light rail system, but to add to it. Each new S-DT8 design also has to fit into the 'Stuttgart Stadtbahn family', meaning it should be yellow on the outside, with a blue patterned interior color scheme. Under the hood, the S-DT8 is made for the extreme changes in altitude that characterize Stuttgart. All eight axles are powered, allowing the LRT to climb inclines of up to 8.5 percent, the highest in Europe without a mechanical gear drive.

The success of Herbert Lindinger's design and the Stuttgart Stadtbahn's engineering is apparent in the fact that all cars from the first generation are still in service after more than 30 years. 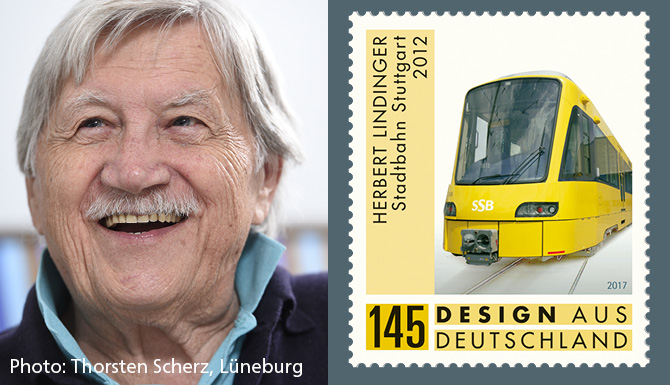 Please note: For copyright reasons, an image permission must be obtained when using the image. Please address all questions regarding the use of the pictures to: VB6@bmf.bund.de.